Physical Characteristics And Looks Of A Munchkin Kitten

The munchkin kitten is an offspring of the munchkin cat which is a young breed that was officially recognized in the early 1990s. with time, this cat has gained a lot of popularity and despite the conspiracy about its health, this breed is creating interest among cat lovers around the world. Though the munchkin kittens are a product of a new breed of cats, they are not very different from other cats in looks and behavior. Their behavior and general characteristics are similar to other domestic kittens only that some differences are as a result of their genetic mutation.

The Physical Appearance Of The Munchkin Kitten

The munchkin kitten is medium-sized as compared to other domestic kittens and it’s mainly characterized by its short legs and a long spine. These kittens also have enlarged heads and dwarfism characters. Due to its short legs, the munchkin kitten’s movements are ferret-like whereby their backs are arched. This arch is because of their raised posture whereby they are raised from their shoulders to the rump. It is this posture and their short limbs that limit munchkin kittens from moving gracefully like other cats.

Munchkin kittens are born with thick bodies and rounded chests. These kittens have different lengths of body hair where some have long hair while others have relatively short hair. The short-haired munchkin kitten has a medium plush coat while its long-haired counterpart is characterized by a more defined silky coat. Both the long and short-haired munchkin kittens come with coats of different colors and beautiful shapes. These colors and patterns add to the cuteness of these kittens and make them adorable and nice to touch. The cuteness of the munchkin kittens is further added by their walnut-shaped eyes that come in different colors. 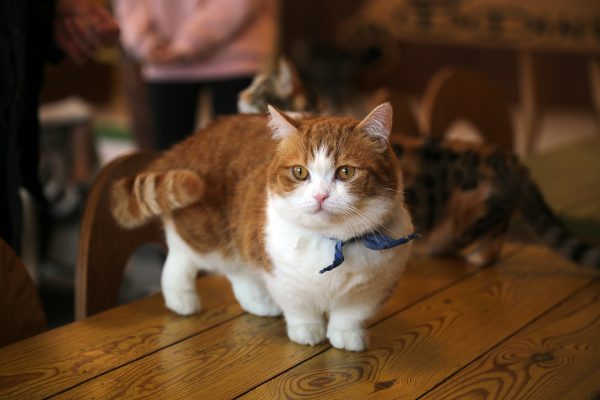 A Look At How Munchkin Kittens Appearances Influence Their Behavior

By the first look, you will notice how cute munchkin kittens look. Their small sizes, large heads, and colored eyes make them look impressively awesome. They are also sweet and outgoing and it’s nice to see them move their short limbs as they play and run around. Their short limbs do not limit their running and general movement and they are playful right from when they are kittens and into their adulthood.

The munchkin kittens look beautiful and impressively attractive due to their faces, beautiful colored coats, and thick hair which makes them the ideal cats for cat lovers. These kittens are good companions and you will never be lonely when you have one.